If you have evaluated recent Mongolian documents, you probably noticed that they look a little different than in the past. This can be confusing if you are trying to compare current documents against prior samples. The image below, taken from Wikipedia, demonstrates the different scripts that are commonly used in Mongolian writing. 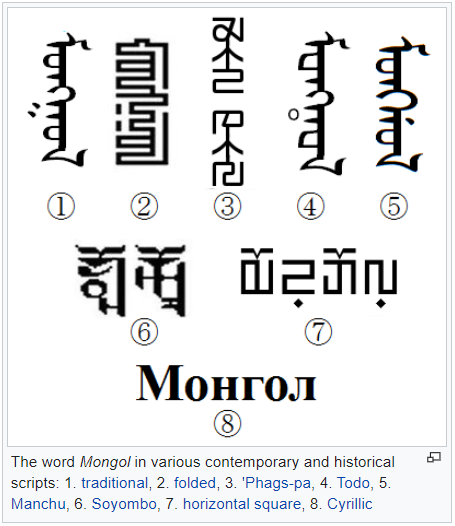 Mongolia has had a long history of using a variety of scripts and alphabets. Mongolia used the Latin alphabet until 1941 but then switched to Cyrillic instead. Cyrillic has been the standard script used by Mongolia since then. Currently, Mongolia is undergoing a change of issuing all official documents and correspondence in both Cyrillic and traditional Mongolian (script 1 in the above image.) By 2025, the government plans to use Cyrillic and Mongolian together for all official communications.

Secondary and tertiary institutions are slowly making the change to dual-script documents. Up until very recently, the majority of documents issued in Mongolia were still using Cyrillic. At Scholaro, we have seen dual-script documents from as early 2017 that included all information in both Cyrillic and traditional Mongolian. Earlier than this, documents were issued in Cyrillic, often accompanied by English versions that were also issued by the institution. Most likely, we will continue to see both documentation formats in the coming years until at least 2025.

Like many countries, Mongolia is attempting to regain some of their tradition by protecting and promoting the use of their national language and script. Knowing this timeline can assist you when evaluating documents from Mongolia so that you can know what to expect based on the date of issue.