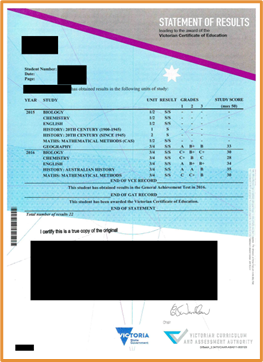 Education in the state of Victoria, known as “The Education State”, is compulsory from the age of six to seventeen, depending on date of birth. Post-compulsory education is regulated within the Australian Qualifications Framework, a unified system of national qualifications in schools, vocational education and training (TAFE) and the higher education sector (university).  University entrance is based primarily on a state end-of-school assessment system.

In Victoria, the Victorian Certificate of Education (VCE) and its Statement of Results are the primary credential used for university entrance, and they correspond to the successful conclusion of secondary education awarded to most students in the state. The VCE course is made up of studies and units, some of which are sequential. A study is a subject made up of four units (Units 1, 2, 3 and 4), each of which is a semester in length. Typically, the VCE is completed over two years. Students take Units 1 and 2 in their first year, and Units 3 and 4 during the second year of the VCE.

Units 1 and 2 of a course can be completed as stand-alone units. However, Units 3 and 4 of a course are completed in sequence. This sequence needs to be completed in the same year if a study score is to be calculated. Students usually take between 20 and 24 units (five or six courses) in Years 11 and 12.

For this credential, the value of each course is calculated by averaging the grades listed on the Statement of Results under grades 1-3. Grades listed under “Study Score” are not used for a GPA calculation. For these courses, one Carnegie unit may be applied (in total) to the series of three grades, weighted evenly. As the VCE is the primary metric for tertiary admission in the state, units and grades are listed separately from secondary coursework transcripts provided by the school.