Teacher Salaries: What to Expect in the Beginning and How to Get a Raise Later On 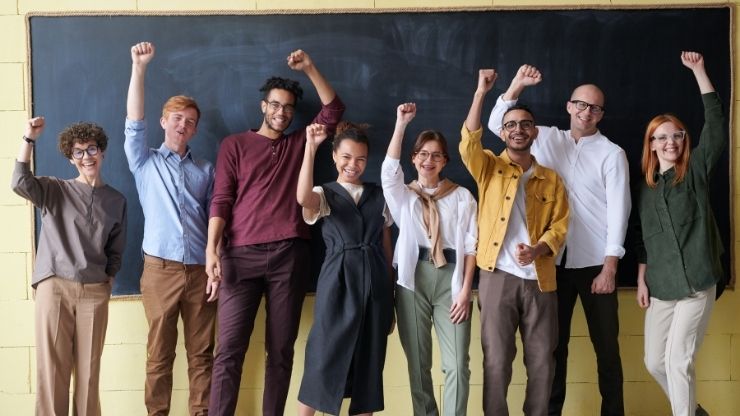 In this article, we are going to focus a little less on how to become a teacher, and more so on something that is important to already being a teacher: salaries and getting a raise. We will be focusing on different standard teachers’ salaries in the same five states we previously covered (California, Georgia, Illinois, New York, and Texas), as well as looking into what can be done to earn a pay increase in teacher wages over time.

According to the National Center for Education Statistics, the nation-wide average salary for public elementary and secondary school teachers from 2014 to 2015 was $ 58,950, down slightly from previous years’ averages according to the data. Each state may tend to have salary averages that deviate significantly (or barely) from the national average. States also vary in what they provide as the requirements for getting a salary increase, which tends to be experience and possession of a higher education credential (such as a master’s degree).

Here are the salary statistics for each state listed:

California provides a very clear outline of what its teachers make. According to the California Department of Education, the median average income for Public School Teachers from 2018 to 2019 was $83,059. This is an overall average that is listed at the end after a series of various charts with different breakdowns of the median salaries for different levels of educators and administrators and those averages based on small, medium, and large Average Daily Attendance (ADA) rates.

Experience appears to be the most prominent factor in how much teachers can earn per year in California. The Commission on Teacher Credentialing indicates that a higher degree is just as acceptable as a bachelor’s degree, so it is not explicitly clear if having a masters will lead to a pay increase.

Georgia also provides data on their average teacher salaries for educators in their state. Unlike California, the Georgia Department of Education lists a break-down of salaries based on teacher and administrator, but what Georgia lists is a more extensive breakdown of pay by years of creditable service, and there is no breakdown of different districts or ADA rates.

Unlike the two previous states, Illinois does not appear to provide any state-produced sources on salary information. Salary.com, however, provides salary information for entry level, elementary, and high school teachers in Illinois.

Like Illinois, there are no significant state-provided sources for salary information. Salary.com provides some information, although not very much. The average salary for New York state teachers is $71,055, with a range of $61,034 to $82,030. These numbers are updated as of March 29, 2021.

These averages appear to be higher than many of the averages seen in the previous states, and the average might be higher than what Salary.com is providing. Education Week reported on the Rockefeller Institute of Government’s report on teacher earnings in the state of New York, which states that the average salary is $79,588. The report even indicates that New York’s teachers are paid the highest in the nation, when compared to other states’ teacher salaries.

Texas does provide a state-provided teacher’s salary report. The Texas Education Agency issued a very extensive report on the average salaries of teachers in the state. This report contains information from the 2012-2013 fiscal year, but the breakdown of different salaries is very detailed. The report illustrates how salaries differ between the Education Service Center Regions across Texas, and between differing counties. Much like with some other states, Texas differentiates salaries based on years of teaching experience. The average yearly salary for new teachers with zero years of experience was $35,636 in 2012 to 2013, while a teacher with 25 years of experience made an average of $54,015.

Texas does not provide much explanation about the difference in salaries between teachers with their bachelor’s or master’s degrees. Instead, their data focuses primarily on experience.

Which matters more? Experience or Having a Higher Degree?

Experience seems to be the most consistent indicated method for earning a higher salary across the country. Many states that do not differentiate between bachelor’s-level or master’s-level certification focus more so on experience than on how the degree level impacts salary. For many teachers, the process begins with having the necessary qualifications to obtain certification, and then it is a matter of time before salary increases are possible.

However, this does not mean that a higher degree is not worth having for a higher salary. According to the National Council on Teacher Quality, “on average, a master's degree earns teachers an additional $2,760 in their first year of teaching compared to a bachelor's degree.” In addition, “This salary advantage expands to an average of $7,358 per year by the time a teacher reaches the maximum point of the pay scale.” So, it seems that having a master’s degree does tend to lead to a pay increase, even if states do not explicitly mention this on their certification information webpages. Nationally, having a higher degree, in addition to gaining experience, does increase one’s overall earnings potential.

It is important to remember that a master’s degree and other post-graduate credentials do not need to be earned in the United States for them to aid in getting a salary increase. Foreign higher education credentials can be evaluated by agencies, such as Scholaro, to provide a degree’s US-equivalency. Credential evaluations give international students, who become teachers in the United States, the ability to qualify for a higher salary. For example, holders of Russian specialist diplomas, Italian post-graduate teaching certificates, or European Credit Transfer System (ECTS) second-cycle, master’s degrees could benefit from having a credential evaluation for the purpose of obtaining a higher level of teaching certification, or simply for the sake of providing reasoning in the case of negotiating for a pay increase. When applying for a credential evaluation, it is important to make sure if the report would be accepted by the board of education in the state where you wish to pursue certification and/or salary increase.